Dave Howe: the man, the icon … and the beard 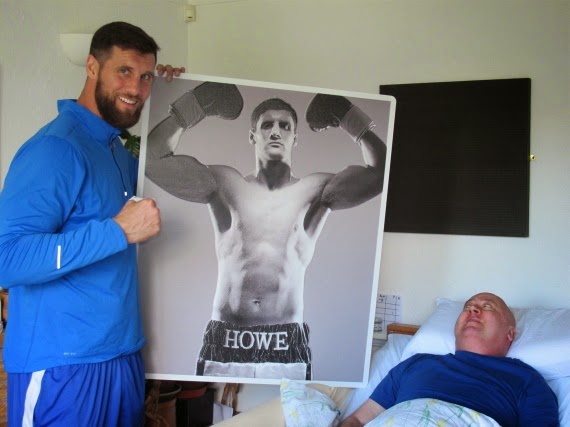 Dave, Sheffield boxer and close friend of Clive’s came to visit last week. It occurred to me that in our enthusiasm to turn one of Clive’s own photos into a tactile image, we never actually spoke to Dave. We chose this image for several reasons. From a printing point of view, it is a simple image, with a clear background and Dave is square on to the camera (perspective is difficult to understand for someone who is blind or partially-sighted) so it suited the process. Clive’s photography is documentary and ethnographic: he enjoys opening a window onto ordinary lives. For him, and his colleagues at Archive Sheffield, “Sheffield is not place, it is people.” Dave Howe is a local boxer who Clive has been working with for some time and, typically for Clive, has become a close friend. So, we chose the image of Dave for Estudios Durero in Spain to turn into one of their Didú tactile images.

As the project grows from one image into an exhibition of Clive’s photographs accessible to the visually-impaired as well as the sighted, Dave Howe is turning into the pin-up boy or icon of tactile photography. Is he happy with that? The smile seems to suggest “yes” but perhaps he's grown the beard to avoid him being instantly recognised around Sheffield. It’s wonderful to see Dave next to his almost-life-size tactile image but what are we going to do about the missing beard? I asked Clive’s brother, Paul, whether we should ask Cristina Velasco at Estudios Durero to manufacture a tactile beard to attach with double-sided tape. He replied that he was sure they could find something suitable in Wendy’s fabric box.
Posted by Stuart and Gabrielle at 12:55